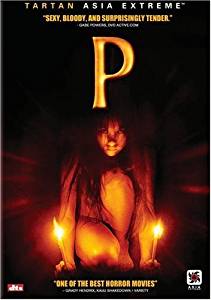 I have no clue what "P" stands for or is short for.  I'm letting you know this up front because if you are looking for answers, I don't have them.  If you have answers though, then hit me up at 30daysofplight@gmail.com and let me know what the hell the "P" means.  I think that pretty much sets the tone for this review as well.

Coming to us from Thailand, P focuses on a young girl (Aaw, later Dau) that is being raised by her grandmother.  While she attends school like the other children, Aaw is an outcast because her grandmother is the local witch and has been training her granddaughter in the craft.  When the matriarch becomes very ill Aaw attempts to get rice and medicine for her but is told they owe too much money to the local merchant woman.  In order to pay for their needs Aaw is tricked into being a prostitute at a club in Bangkok.  To survive, and get what she wants, Aaw uses what her grandmother taught her, but eventually forsakes the two rules she was told to never break: 1) never take payment for magick done, 2) never eat raw meat.  Breaking these rules lets the evil in...

There's a bit of a disconnect between the home and Bangkok sections of this film.  I can't tell if it's an intentional break but it felt like the film was heading in one direction but suddenly spun the wheel and ended up eating a raw pork salad in the city and letting everything go to shit.  There are a few other disconnects I faced while watching this but I think that they're more of a cultural difference and a misunderstanding on my part so I won't go into those.

Suangporn Jaturaphut does a great job in the role of Aaw/Dau as well as when acting as the evil version of Dau.  It's the subtle evil you find common in J/C/K/T-Horror but it is effective here.

If black magick and foreign horror aren't your thing, then at least look up the scene where Dau uses her darker magick for the first time and a scum bag gets his dick bit off by a snake.  More scum bags need their dicks bit off by snakes, at least in my opinion.