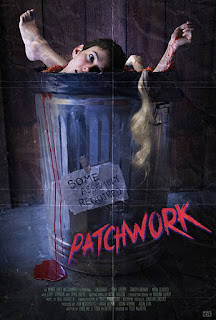 There's been such an interesting 80's revival happening over time.  Maybe it's starting to taper off a bit, but we've had this odd nostalgia with the uptick of 80's inspired synthwave and all of these remakes of old beloved things or just homages to that time period.  Stranger Things hit that hard, the soundtrack to Drive (which, let's be honest, is fucking great), and the It remake.  I know the original It came out in 1990, but I get some leeway here.  So with a poster like I have posted above, I was expecting some sort of nod or throwback, which I got concept-wise, but it was so much more...

Patchwork is a horror comedy where Dr. Frankenstein hung out with Herbert West and they just happened to have three recently deceased women to combine into one.  However, instead of being of a single mind, each of the three women still exist inside of this creature.  It's kind of like an old episode of Herman's Head only each of them can be in control at the same time.  Their plan is to find out who did this to them, but along the way they turn their investigation into an outright murder spree.

I'm getting this out of the way first, but before the 3-in-1 woman unifies her look, she looks like a genderswap of the anime character Blackjack.  Seriously, look at this shit! 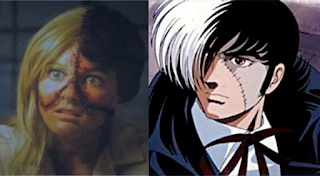 After I got over that revelation I got really into this movie.  There's a reference to Reanimator with a glowing green-filled syringe being the device that reanimates the body, a character playing the original Castlevania and doing the Frankenstein's Monster/Hunchback boss fight, and probably the greatest 15-seconds of film ever with the release of the Owlcat.  The acting is fantastic as our ladies' body movements are jerky and broken in all the right ways.  We're also treated to a wonderfully done rampage section in a frat house where she just puts in ear buds and dances/dispatches douche bags left and right.

You should definitely add this to your must-watch list for horror films if you haven't seen it yet.  It's just a fun time with a great take on body horror.  I will most likely add this film to my personal collection when I have the money.

I give Patchwork 5 surgical staplers out of 5: