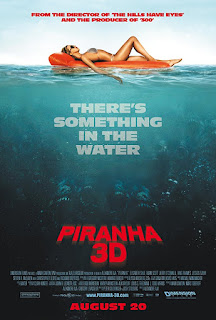 There's something in the water!  It's Jerry O'Connell's CGI penis!  Everyone get out of the lake!  Real talk though, there was a part of my brain that ignored the fact that this film was ever remade.  Then I promptly had my mind blown by the people involved with this movie.  Neville Page did creature design?  Jerry O'Connell (and his CGI dick), Christopher Lloyd, Elizabeth Shue, Ving Rhames, Adam Scott, Paul Scheer?!  Where the fuck did the money come from for this movie?  Why did they decide to remake Piranha?  And most importantly, why was this movie kind of okay?!

Piranha's plot is simple.  A small quake opens up a crack in the bed of a lake.  This gives way to a subterranean lake full of prehistoric piranha that have also evolved to be extra badass.  It's also Spring Break which means people came to party at this lake.  I assume these college kids are the lamest of the party kids to just come to a small town with a big lake to party.  We have our main characters but it's all the usual shit for them.  Teenage son shirks off his babysitting duties and then he and his wards all end up in danger.  Their mom is the sheriff and has to come save them while dealing with dumb college kids and killer fish.

They knew what the fuck they were making with this film.  It's dumb, but lovable dumb.  There are lines like "If fish looked like that I would fuck fish.  I WOULD ONLY FUCK FISH!"  The CGI kills done by the schools of Piranha are extra gory and great.  We get a bunch of people that end up with gnawed skeletal sections of their body, and even a cable slice followed by an upper body slide down the cut (a personal favorite of mine in horror).  The only thing I really hated about this film was Jerry O'Connell just being the grossest of the gross.  I get that he's supposed to be as sleazy as Joe Francis, but I grew up watching My Secret Identity and Sliders.  Jerry will always be the dorky guy that ends up flying with the help of aerosol cans in each hand.