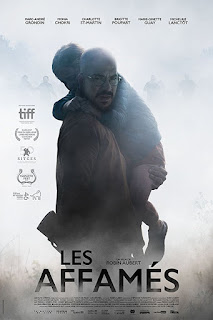 Do you like Cormac McCarthy?  In particular did you like The Road?  Do you wish that rather than the strange Mad Max raiders he put in there that the big bad were some sort of zombie/cannibal?  Do you also want it all presented to you in Canadian French?  Then brother I have a film for you!

Ravenous takes place in rural Quebec where a viral outbreak has turned people into a zombie-like state with a craving for flesh.  Our story focuses on a single man that tells jokes like your drunk uncle at a wedding.  He exists to lose his friend, gain a new female friend, acquire a small child, and join another small group of survivors.  Who lives?  Who dies?  Who was at risk of falling asleep during this movie?  Spoilers: The answer to the last one is me!

I'm not saying Ravenous is a bad film, it's just slow.  It's slower than most films I've complained about being slow.  Even when we're faced with someone fighting the infected it's not enough to get the adrenaline pumping.  This isn't helped by the generic attempts at getting the audience to establish a personal interest or connection with these characters.

Then I have my personal complaint with this film.  The woman that takes on the "mother" role of our group carries an accordion with her almost everywhere.  I own an accordion and let me tell you that those mother fuckers are heavy.  There is no way in hell I would consider carrying it on my back in an armageddon situation.

I do appreciate the personality of this film's infected.  They retained enough intelligence to be able to set traps as well as have an almost communal or pack mentality.  They don't overexert themselves by chasing prey until they drop and they work together.  They aren't perfect.  We get a few scenes of them just standing in a field waiting for something to catch their eye, but it's progress.

I give Ravenous 1.5 accordions out of 5: