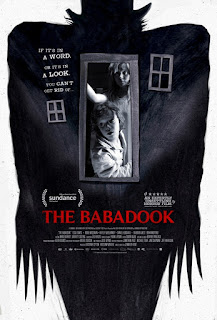 This is my second time watching The Babadook.  I saw it not long after it came out and didn't understand what all the fuss was about.  So when it came up for this website I realized that I needed to check my shit at the door and give this film an honest chance to see if maybe, four years later, this film had something that I missed.  Don't get me wrong, I missed or forgot about a lot, but do I still think this film is a Babadookie?

The Babadook is a visual representation of anxiety and depression.  Everyone knows this by now.  A single mother and her six-year-old son are going through some hard times and a book titled The Babadook mysteriously ends up on their shelf.  It freaks them both the fuck out and from that moment the boy begins to claim that certain things are the Babadook's fault or that he is physically there.  The one thing he keeps telling his mother though is to not let him in... she shits the bed on that one.

A lot of the conversations I've had about this film have people pointing a finger at the boy and basically saying "that kid is a shit," or blaming him in part for his mother's problems.  Okay, first off, that kid is on the cusp of turning seven and built a backpack catapult and a crossbow out of random pieces of wood and string.  That's some incredibly intelligent shit for someone that age.  Other than that, he's just a typical child.  He hasn't developed proper tact, he is curious about all kinds of things, and if you don't pay attention then he may get into some shit.  On top of that, he realizes that there is something really wrong with his mother emotionally and attempts to comfort her and let her know that he won't leave her.

They're both dealing with the absence of his father (he died in a car accident while driving the mother to deliver the boy).  It just happens that as the birthday approaches it reminds her of what her life was meant to be (a writer), and what it became instead.  She also doesn't have a network of supportive individuals as her sister sucks and she hides the truth from her neighbor and coworker.  Her depression is so deep that she can't sleep, calls off work, ignores her child, and becomes a miserable person overall.  It's only once she realizes that she needs to get help and, for lack off a better metaphor in this film, stands up to her depression (The Babadook) does she begin to heal.

The Babadook is banished to the basement (where the father's stuff all remains) and she acknowledges it, feeds it worms, but doesn't let it rule her life anymore.  She's become a greater mother, neighbor, and person.  If only dealing with depression were as easy as yelling "THIS IS MY HOUSE!" and then giving your depression worms every so often...

This has been more of an analysis than a review.  I still don't really like The Babadook.  I think it's okay but I've touched on my dislike of "the real monster is mental illness!!!!" enough on this site.  The movie itself is just paced too slow and it felt like a slog, especially when I knew what the payoff was going to be.

I give The Babadook 1 Babadook Meme out of 5: