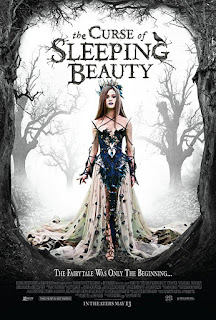 Someday, I can only hope to have an unknown uncle leave me a house full of mannequin parts and blood magick.  I have an entire branch of the family tree that split from my side a few generations back, so it could happen.  Suddenly I could get a letter in the mail about secret basement rooms in a creep house while I have dreams of a mildly attractive scene girl.  I mean, I don't care about the girl, but the creep house I'm all in for!

So that's part of the plot of The Curse of Sleeping Beauty.  Thomas inherits a large and strange country home from an unknown uncle.  In the letter he is told of how he is tied to the house by blood and to never go into the secret basement.  After a quick visit, in hopes to get the house ready to sell, he finds out that it's associated with a series of disappearances and carries a heavy anxiety with the locals.  With the help of a local woman (that is searching that home for her brother), Thomas uncovers some apocalyptic shit involving demons, djinn, and a mysterious woman known as Briar Rose that is sleeping somewhere below.

This was a surprisingly good movie.  There was a great mix moments where you're holding your breath in expectation and straight up visual horror.  The application of the mannequins in the house and their role in the story improved with each bit of lore.  The set, prop, and character design gave me this sense of Guillermo Del Toro meets City of Lost Children meets Silent Hill:Revelations.  The only thing that felt out of place was the strange hacker character that they bring in to help translate a journal.  He doesn't serve any real purpose except to have an "oh shit" moment while everyone else is traversing the chamber of secrets like Harry fuckin' Potter.

The very ending of this film appears to be leaving things open for another film.  If so, I hope their plan is to work through other fairy tales because this really should be a one-and-done.  If not, they'll kill what momentum they had going for it.  At the same time, this could also turn into a really long and shitty episode of Supernatural if they fuck it up.

I give The Curse of Sleeping Beauty 3.5 copies of Grimm's Fairy Tales out of 5: