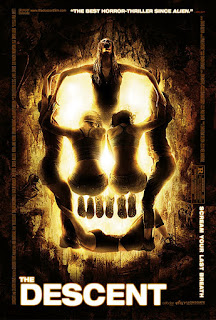 I'm not sure how, but I have never watched this film before.  I've heard really good things about it, knew the general plot, and liked the fact that the poster copies Salvador Dali's "In Voluptas Mors," yet I have never felt the urge to sit down and watch The Descent.  Then the universe decides it's time and I have to sit down and watch it.  The question is, over a decade later, will I like this as much as other people did?

The Descent leads us along with a group of women coming together to do some cave spelunking.  This is their first group outing since the death of the husband and child of one of their members (Sarah).  While it's meant to be a healthy and healing gathering, their interpersonal issues cause a lot of tension, especially when a new girl is introduced to the group.  What was planned as a simple trip down and through an established cave formation turns dangerous when the planner actually takes them to an undiscovered cave and a cave-in traps them inside.  Lost in unmapped and unfamiliar terrain, they attempt to find a way out but instead find why no one has ever survived to talk about these caves.

Okay, confession:  I don't think this lived up to the hype.  It was close, I'll say that, but I think the difference in time might be what knocked The Descent down a few pegs for me.  About 90% of this film I was down for.  The only things I found lacking were: 1) I wish the Native cave paintings would have included something about the creatures.  Even just one weird little mud guy slapped on there.  2) The creature design didn't do it for me.  I think this is because I've been watching too much FaceOff (the show, not the movie) but it's just this bat/human hybrid which is such a go-to design for something cave dwelling.

Oddly enough they made a sequel to this movie in 2009.  It even has Shauna Macdonald reprising her role of Sarah.  I can only assume this was a cash grab on the popularity of the first movie.  Odds are if it ends up on Netflix then I'll end up watching it for this site.

I give The Descent 3 pictures of why I will never go spelunking out of 5: