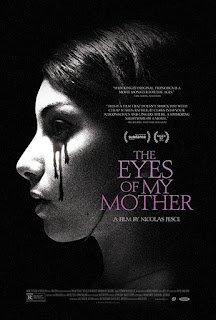 If you take nothing else away from the entirety of this website, for as long as it may exist, I want you to remember one thing:  You can't spell "fart" without "art."  Now keep this in mind because I'm going to drag you along with me through this film student project.

IMDB's description for this film is "A young, lonely woman is consumed by her deepest and darkest desires after tragedy strikes her quiet country life," but that's too vague for The Eyes of My Mother.  Francisca's mother was a surgeon in Portugal.  I'm not sure why they're in bumfuck USA (probably something dumb like love) but the mother has been passing her skills and knowledge onto her child.  Then, one day, a man shows up on the property and kills the mother.  The husband comes home, knocks the man out, and chains him up in the barn.  The girl eventually cuts his tongue and eyes out, but not before he answers her question of why he does such things.  Everything from this point is dumber than all the preceded it.

I'm not totally writing this film off as it might be for someone, somewhere.  It just did nothing for me.

I give The Eyes of My Mother 1 ancient Japanese scrolls with men farting out of 5: