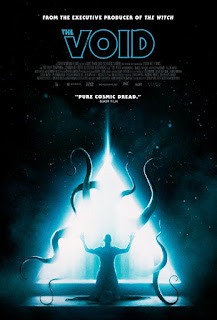 You know the beginning to the Outer Limits?  Where a monotone voice tells you to just sitting back and relaxing because "they" control your TV and are about to take you on an adventure?  That's pretty much what happened to me when I started watching this movie.  Rather than a descent into madness it was an ascension into it.  You go willingly as opposed to fighting tooth and nail.

The Void throws us right into it with two men attempting to kill everyone in a remote country house.  A survivor makes it onto the road where the local Sheriff notices him and transports our man to the closest hospital (20 minutes away, just to show that this is fuckall USA).  We're then given about an hour or so of insanity, Silent Hill-esq monsters, crazy cultists, and a doctor that read too much Lovecraft.

I really liked this film.  It felt like someone was turning up some sort of intensity knob slowly from the start, but paced it so well that when you reached the end everything was at its breaking point.  I could see the influences of Lovecraft but more so I saw the influence of the first two Hellraiser movies.  Nods to Frank, the labyrinth beast chasing Kirsty in the hospital, and the Leviathan are all present but not heavy handed.  It's tastefully done... you know, as hell creatures go.

I also like that "The Void" isn't just an arbitrary title.  There is a literal void which exists in a space between the folds of our perceived universe. Somewhere between life and death, somewhere with weird muscle monsters and giant triangles.  Actually I just made this sound like a gay club...

I give The Void 4.5 bloody Franks out of 5 (I'd watch it again, but I probably won't buy it unless the DVD has amazing extras):