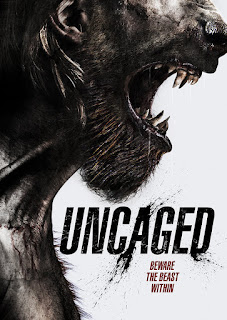 I've been disappointed by films before.  Had my heart broken.  Been starving hysterical naked, dragging myself through the streets at dawn looking for an angry fix.  Okay, that's actually the greatest minds of Ginsberg's generation but you get the point.  There are films that I hope will bring good things once I hit play.  I assumed that a werewolf film called Uncaged could take me places.  Instead it just left me on my couch with a want for something real.

Uncaged puts us shortly after our main guy's 18th birthday.  Apparently becoming a man also includes becoming a wolfman for him.  His uncle invites our guy to his cabin for winter break.  It will apparently be empty and this is also the time that his wolfy-ness should be kicking in.  Wolfman invites his misogynist-hyper-sexual-focused-but-virgin cousin and their friend.  Our wolfdude begins to realize there's something wrong with him and eventually gets tied up with a local crime person.  Wolf shit happens, this movie is bad, and they try to pull off a low budget version of the American Werewolf in London change but end up giving us a wolf snout, teeth, and an Amish beard they picked up from the Spirit store.  It's butt!  BUUUUUTTTTTTT!

I think the moment I gave up on this film was about two minutes in when the cousin is having a conversation and says "she is thirsting for my penis."  That's pretty much how that guy talked the whole time, unless he was making a gay joke.  His dying wish was for a prostitute so he wouldn't die a virgin.  Well virginity is a social construct and not a real thing.  Do you know what is real?  This movie, but it needs to be forgotten.  Left as a bad dream best forgotten for it's terrible writing, boring looking wolf, and all around aura of an egg fart.

I give Uncaged 0 copies of Soundgarden's "Rusty Cage" single out of 5: