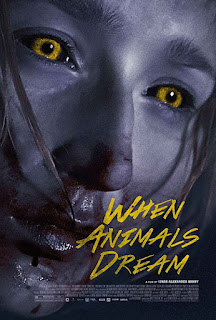 Denmark: A country that I looked up a bunch of facts on and, while most of them are pretty cool, I don't feel like sharing them on here.  A land where people live simple lives and work at a factory that processes fish.  A land where one guy is a total asshole to his female co-worker and he and a friend do a fake sexual assault using a fish, as if that makes the shit joke okay...

When Animals Dream is less of a horror movie and more of a light thriller with a horror element.  Marie lives with her father and ailing mother.  She lands a job at the local fish processing plant and all seems to be going well.  That is until she starts to unravel a secret about her mother being part of some Russian tests and that whatever the mother has might have been passed on to Marie.  I'm being vague but long story short, it's some kind of lycanthropy, and everyone in the town knows what's up.  Some people end up missing and they come for Marie and her mother.

This film was incredibly slow if you're looking at it solely from a horror stand point.  The actual wolfwomen segments are minimal and it's not a shock because I guessed what this was going to be about just based on the title.  I don't know why werewolves are the thing to associate with this "coming of age."  Just last week I covered the same general plot with Uncaged.  There's also Ginger Snaps which everyone knows by this point.

I get it!  Puberty sucked for us all.  Hair where the was no hair before, adult teeth bumpin' in, primal urges to jizz into all the tissues that exist in the house, yeah, we get it.  The same with the passage from teen-to-adult.  We fucking get it!  After watching this I spent a bunch of time trying to think of a different monster we could use for this metaphor but nothing really works well... except for maybe the Creature From the Black Lagoon.  You could hit puberty and get weird dick gills or something.  Oh god, that'd be the worst.

I give When Animals Dream 1 t-shirt of wolves howling at the moon out of 5: