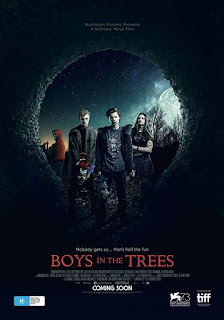 Initially I wasn't sure if this movie was set in the 90's or if Australia is somehow two decades behind us when it comes to music.  It was probably one of my least valid thoughts about Australia ever, not that I'm thinking about Australia a lot.  It's not like I sit by the phone waiting for Australia to return my calls.  We only went on one date after all...

Boys in the Trees is set in 1997, just so we're all on the same page.  Of course the soundtrack of Marilyn Manson, The Presidents of the United States of America, and Rammstein should tip you off that we're in that decade... or that you're riding in my car.  Being that this isn't in my car, you're in Australia where a bunch of skater kids are dicks to another boy (Jonah).  We find out that our main character (Corey) was once friends with the outcast but Corey ran away when Jonah needed him.  Later that evening Jonah wipes out a quarter pipe and hits his head.  He convinces Corey to walk him home but their journey takes them further down memory lane than initially thought.  The whole time things seem off with Jonah.  It isn't until we reach the end of the journey do we find out why.

This isn't a horror movie.  It's a hard drama that just happens to have a small supernatural reveal.  However, this film does a really good job of making you feel as though something is going to jump out at you.  Stories of ghosts, shadows of wolves, and ominous visuals trick your mind into expecting the spook that never comes.  The fact it's Halloween night only adds to this false tension, especially when we encounter the gang of skater miscreants.

I'm not going to spoil it, but there's a really good moment at the end where the "leader" of the skaters does something out of character and the other skaters all remove their Halloween masks.  It's very much a "under this monstrous exterior they're still just lost boys" moment, but it creates such a sense of change in that world.  Or maybe it's a sense of self-realization among that group.  Either way, it makes the overall ending that much stronger.  At least to me.  You might totally hate that kind of thing, but then the real monster was you all along!