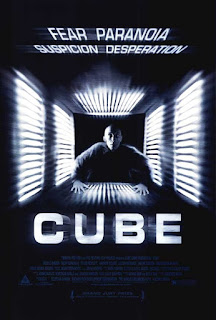 I've never been super strong with math (aside from geometry).  I can handle the basic day-to-day type stuff but aside from that it was never my thing.  So odds are I couldn't survive the Cube on my own.  Although, I would totally poop in it.  You're stuck there, trying to figure things out, and only one person has to pee the whole time?  If death is coming then I'm going out with nothing to lose.  Literally.

Cube gives us a bunch of people that wake up inside of large rooms with a door on each wall.  Most of the rooms connecting have some sort of death trap but over time everyone starts to find out there's a skill each one has in order to survive and hopefully find a way out.  Shit turns Lord of the Flies kind of quick.

The best parts of this film are probably when someone triggers a trap.  I love a good body slice and that's one of the first things we get.  There's also a great moment where they establish one of the people to be their hope on getting out and then ten seconds later his face gets melted by acid.  Unfortunately, these were the only moments I enjoyed.

All of these characters could have survived or they all could have died and I wouldn't have cared.  Actually, that's partially true as I think the only person that should survive out of this gaggle of assholes does survive.  The structure is stupid and there's not logical sense for its existence.  Seriously, who fucking paid for this shit?! Also, I'm confused on this room moving thing if it's as massive as they say.  Wouldn't its size mean that certain rooms would never be reached or utilized?  Did my tax dollars pay for this shit?  Because I want that money back!