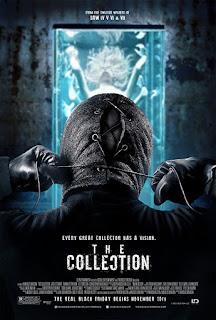 I have never seen The Collection prior to this viewing, but before I even started watching it I had it confused with about five other films that came out around this same time.  All of them slightly interchangeable in content and plot but pretty much the same.  It also doesn't help that the villain here wears a modified version of the mask from Nightbreed, which, while I'm on the subject, what the hell are those masks made of?!  They look like hard plastic but then are some sort of weird fabric.  What is your secret?!

The Collection focuses on a nameless serial killer that has the news all atwitter.  While unconfirmed, it's believed that they kidnap at least one person from a scene.  One of the Collector's captives (Arkin) escapes at a night club slaying but he's replaced by the sole living woman.  This woman is apparently from a loaded family because some sort of mini-mercenary team lead by Lee Tergesen (Beecher from Oz, or Chett from the Weird Science TV show) grab the escapee and make him help find the Collector's hideout.  Then they force him inside despite his refusal.  Then it's some of the dumbest traps you've ever seen for about an hour.

This movie came out in 2012.  That's eight years after Saw, seven years after Hostel, and 17 years after Seven, and yet it still felt like it was ripping all of these movies off.  The traps were so absurd and overthought that they don't make any sense.  Tripwires are fine but three giant spikes coming down from the ceiling in a very specific spot seem a bit excessive.  This film also starts strangely similar to Blade.  Both have an underground nightclub where the audience knows everything is going bad.  The only difference is that while Blade had the "bloodbath," The Collection had a thresher from the front of a threshing machine just mow down an entire crowd of people.

While I'm complaining about things, I don't get the giant cubes of weird skeleton and body part things he made.  If they're just suspended in water then that would mean that the flesh would still decay in there, but if it's something like formaldehyde, well that shit would definitely not put a fire out.  It would make your face explode.  Explain this to me!  Honestly, explain to me anything this killer does because I don't get it.  He's eccentric just for eccentric sake and it stinks like a steak fart.

I did like how Arkin helped them find the hide out and his overall problem solving in this film.  Lee Tergesen is also a shining light in this darkness, but he has to die for the good of all mankind.  He's too pure for this world.

I give The Collection 1 Decker from Nightbreed out of 5: