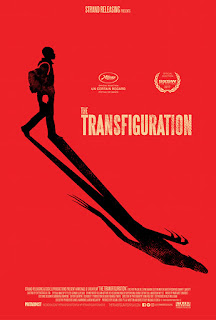 I don't think anyone can say that they never emulated (even a tiny bit) a character they saw in a movie or on TV.  To this day it still takes effort to not act like Razor Ramon if I'm using a toothpick, and he was just emulating Scarface!  Also, as kids, I'm sure we all ran around with plastic vampire fangs cutting our gums, drool running from our mouths, as we mumbled about sucking blood.  There is a line that most of us don't cross though.  We don't begin to believe we are who or what we are copying.  So when someone blurs that line between reality and fantasy, we get something like today's film.

The Transfiguration focuses on Milo, a teenage boy living in project housing with his older brother.  He's an outcast, friendless, and referred to by others as "freak."  His primary solace is found in his collection of dubbed vampire flicks and online nature videos.  Eventually he befriends a girl named Sophie and she gets close.  So close that she finds out that his obsession with vampirism goes beyond watching it on the screen.

I wasn't sure where this film was going while I was watching it.  It took elements that I normally find frustrating while watching a movie and turned them into art.  There are long periods of just ambient noise of the world around Milo, and rather than push me away from the film it pulled me into his isolation.  I kept waiting for the real supernatural element to drop and when it didn't come I felt as though I lost my footing.  Stumbling to understand Milo's actions more and more.

This isn't a film for just anyone, and I wouldn't recommend it for a movie night with friends, but I will say if you have some free time and can actively watch this film, then do it.

I give The Transfiguration 4 Barnabas Collins portraits out of 5: