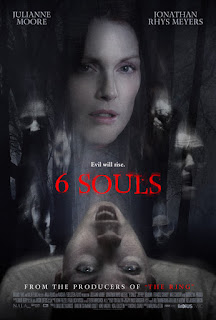 My first note for this film is just "Pittsburgh represent!"  In truth, Pittsburgh is nothing more than a setting for this film but it was nice to see some old favorites like Ritter's Diner.  There is a moment though where the one shot looks like it was done in East Liberty but then the next shot of what's supposed to be the same scene looks like it's the West End.  This means nothing to you reading this unless you're from the 412, but at least it's not someone trying to pass off Toronto as Pittsburgh.

Oh man, let's talk about the plot of 6 Souls.  Cara is a forensic psychologist that gets called in by her father to take a look at an interesting case of a man with multiple personalities.  What's interesting about this case is that the personalities have no overlap, so much so that one of the initial two we're introduced to has colorblindness where the other doesn't.  A third personality comes out (a singer in a death metal band) and this leads to Cara finding that all of these personalities were real people at some point.  Eventually this film goes off the rails when it begins to involve some made-up Appalachian folk-magick, the story of a priest without strong faith, and what might as well be some "believe in god or the boogyman will get you" spooky twist.

Of all the directions this film could have taken, I wish it would've chosen any of the others than the trail it took us down.  It wasn't bad so much as it was just asking too much of the viewer to stay engrossed when it seemed like the story was falling apart more than it was coming together.  The ending was too transparent to have any sense of shock or sympathy from me.  The entire first two acts are slow and while they're presenting us with information it's info that we're not sure what to do with.  We know it'll get glued together but by the time it does we already knew where it went so there was no reveal.  When the hypest thing in this film for me was Ritter's Diner then you know this film fucked up somewhere.

As a side rant, what fucking audio software does the one guy in this film have where he can take a photo, isolate a section of it, and turn it into a three dimensional soundwave?!  Most people are running Pro-Tools so don't lie to me like this jagoff in an old Southside warehouse has anything but that running in his "studio."  Funk dat!