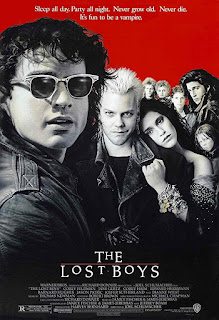 When I was in college I took a course on vampire lore.  One of the first things the professor asked us was "why are people interested in vampires?"  After the typical collegiate round of answers she finally just yelled "it's because they're sexy!"  I think that this film really makes that ring true.  Sure, there were the Hammer films of the 70's which were just shy of (or just were) porn coming before this.  But this, this is 80's leather jacket sex on legs... and a possibly queer Corey Haim with his sexy Rob Lowe poster on the wall, camp style clothing, and a beaver hidden in his closet.

The Lost Boys takes place in Santa Carla, California where Michael, Sam, and their mother move in with her father.  Michael instantly falls for a girl that hangs out with David (Kiefer Sutherland) and his gang of assholes which includes Bill (Alex Winters) from the Bill and Ted franchise.  Sam ends up befriending the Frog brothers at the local comic store and they give him a comic about vampires that they say may save his life.  Michael gets turned into a dhampyr by David's crew, Sam freaks out, the Frog bothers want to kill all bloodsuckers.  So we get this rag-tag group of dorks trying to find and kill the head vampire all to one of the best soundtracks to ever exist.

This movie is a classic.  You can't hear that dark synth and child chorus singing "thou shall not want" without getting hyped immediately.  When the final fight happens we get some great vamp kills, including the infamous "death by stereo."  The casting and acting are all spot on.  Kiefer is pretty much the only one in the vamp gang that has real lines and his presentation plants him firmly in the realm of "this dude is a badass."  My big question mark for this film is that as one of the Frog brothers, I have no clue what Corey Feldman's voice is supposed to be.  I don't think he even knows what it was.  It's like he was possessed by a 70 year-old chain smoking grandma. "Read this comic and pick me up a carton of Reds!"

There were two modern sequels made to this film.  I'm not sure why.  I haven't seen them so I can't say.  I doubt I will ever willingly sit down to watch one of them by my own volition.  This movie didn't need a sequel.  All of the loose ends are tied up so to me it's like looking at something like the Mona Lisa and deciding it would look good to copy it but just make her have a big cartoon dick behind her.  Big ol' floppy purple wang flappin' in the breeze.

I give The Lost Boys 5 unnecessary Zombie Peter Pans out of 5: