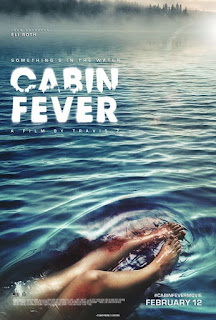 I didn't realize until the end of this film that I was watching a remake of the original movie.  They literally took the script from the Eli Roth original and did a re-shoot.  Was this really necessary?  I know I'm jumping into the shit talk on this way to early but for real?  It's not like you were rebooting the property or anything.  It's only made worse because I'm not really a fan of the original Cabin Fever to begin with.

If you're unfamiliar with the plot, a group of college kids rent a cabin in the country.  Early on we know that there is some sort of viral or bacterial outbreak based on an exploding dog named Pancakes.  After one of these college jag bags finds a gun at the cabin and accidentally shoots an infected man in the woods.  The man finds his way to their cabin where he vomits blood everywhere before being set on fire and runs off to dive into the local reservoir.  The disease begins to develop in our cabin kids and they all end up dead, one way or the other.

Neither this, nor the original are really scary as far as horror movies go.  They really get classified as body-horror for the squick feelings you get from seeing huge wet open sores or someone shaving their legs and literally shaving off strips of flesh.  The latter of which I don't remember seeing in this re-make.  I covered the prequel movie Cabin Fever 3: Patient Zero a while ago but it doesn't add much to the lore.  It just makes me wonder what Sean Astin needed the money for.

Here is my head cannon for why this film even exists: Travis Z tells Eli Roth he wants to direct a movie but doesn't have the background to do anything big.  Eli Roth figures that Cabin Fever was his big breakout so he gives Travis Z the script, says he'll produce it, and assumes that lightning will strike twice.  Instead it hit a small child off to the side and both Eli and Travis are labeled as witches and burned at the stake.  The End.