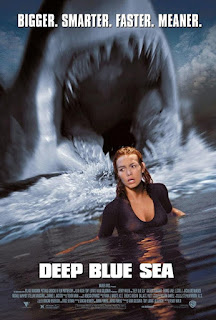 Something that I love with horror is that when it comes to science we have this "bigger, better, stronger  faster" approach to everything.  There's no isolation of a single piece like how real life scientists cloned an ear on the back of a mouse.  No!  It's all or nothing!  If it were a horror film then they would've been trying to clone their dead child on the back of a rat and we would've ended up with something looking like a TMNT villian (I'm talking original cartoon, not this Michael Bay/Nickelodeon stuff).  Don't get me wrong.  I think that there are some crazy labs somewhere out there that are making a real life Bebop and Rocksteady under an ice cap or something, but horror really pushes science above and beyond.  Like with today's film!

I don't know how I haven't watched Deep Blue Sea until now, but strap the fuck in because here we go!  In the middle of the ocean is a marine biology lab where their attempting to grow a specific section of shark brains in order to harvest the tissue and possibly cure Alzheimer's.  It's a valid pursuit, except that they violated certain standards and in the process created super smart murder sharks!  Throw in Samuel L. Jackson and LL Cool J and you get a movie full of murder sharks and those guys!  Don't get me wrong, Mr. Jackson adds a lot, but LL Cool J is just random.

It was nice to see what all the hype was about finally.  My only major issue with this film is that it's very dated.  Granted, it's almost 20 years since this came out, but films from the 1990's just have this weird aura around them.  You know they're from the 90's based on characters, music, filming, or content.  It's like an entire decade had a slime dumped on it that dried and everything just has this odd film to it.

Otherwise, Deep Blue Sea still delivered.  The CGI looks good for the time with a few questionable moments, Sam Jackson is Sam Jackson up until he gets eaten by a shark, and I don't really remember any of the white people in this movie.  They're all kind of forgettable.

I give Deep Blue Sea 3 bottles of Cool Water out of 5: