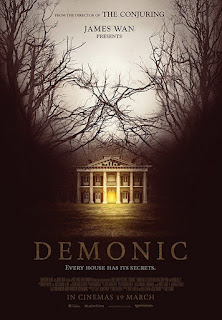 I've mentioned before that I have a pretty large library of books in regards to magick, folklore, etc., so when this film introduced a sigil it referred to as the "circle of the left hand path" I was at a loss.  I had never seen this sigil before so I did a quick Google search only to find that the main places this image existed are in this film and some crazy spiritual warfare site that looks like it was copy/pasted from Geocities.  I can only assume that the person that runs that site saw this movie and took it to be a documentary.  The website also had all the sigils drawn in sharpie and scanned, which leads to a hilariously bad Cross of Leviathan.

Demonic takes place in a house where a series of ritual murders happened years prior.  Police are called out after a caretaker finds the lock broken on the home and they find a sole survivor among the bodies.  While the cops attempt to make sense of the scene, we get told most of the film in flashbacks.  Our survivor is the son of the only woman to escape the previous murders.  He, his girlfriend, and a group of semi-friends go to this home in a half-assed attempt at ghost hunting.  As the unexplained happens around them they decide to do a seance (because they're fucking idiots) and everything goes to hot fuck!

The ending reveal of this film was unexpected and I liked that.  What I didn't like was another one of these "Let's go to this haunted house and find spooky things!" movies.  Do you hear me film makers?!  No more of this Blair Witch/Grave Encounters shit!  It's been done, to death!  Fucking buried and in the grave, never to return!

I will say, in this film's defense, the meat of it was good.  The special effects and camera work were done well.  The set design was just that perfect mix of old house and creepy ritual site, and the acting was solid.  It's a shame the overall content of the plot couldn't have been worked out to be stronger.

I give Demonic 1 Dark Ritual MTG card out of 5: