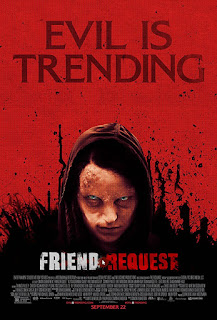 Okay, based on the name of this movie and the tag line on that poster I bet you're expecting me to just up and talk mad shit on this film.  The moment the I saw the title of this film I let out an audible groan of displeasure (and that poster really didn't help) but not all things are as they seem and sometimes you need to peel back the skin to get to the sweet sweet fruit inside.

Friend Request opens with a professor telling his class that a fellow student (Marina) had killed herself.  After some blasé reactions from most of the class, one of them asks if it was true that a video of the suicide was posted on the school website.  Flashback now to when our main girl, Laura, ends up meeting and befriending Marina.  Laura becomes Marina's Fakebook friend but after Marina feels her friendship was betrayed by Laura she practically attacks her before running off and her eventual suicide.  The suicide though is a ritual in which Marina becomes a ghost in the machine.  Through controlling Laura's Fakebook, Marina begins to turn people against Laura all while using the modern black mirrors of laptop and smartphone screens to kill her closest friends so that Laura knows what it really feels like to be "alone."

My overall opinion of this film is indifferent, but I think that's because I watch most of these horror movies by myself.  Once my viewing was complete I had the feeling that this would work much better as a Friday night with friends type of film.  It's made for a crowd to react to it and each other as opposed to one dude sitting on his couch, but I can recognize that and give it credit where it's due.

The concept feels a little bit immature to me, but I'm also long past being a college student, and even when I was, I wasn't a social butterfly so I don't have a frame of reference for this.  Friend Request did have one moment that I popped for and that was that early on we're told Marina has Trichotillomania (a hair pulling disorder).  Later in the film we are shown her bald spot it has become this creepy wasp nest and there was a flash of "Oh shit! someone took some time to think of that and it really pays off!"  There's also the black mirrors existing in technology as one of those techno-pagan things I never thought of but its inclusion only helped this film.

So overall, watch this with friends.  Order pizza, have some snacks, get caffeinated or inebriated, and have a good time.

I give Friend Request 2.5 Japanese Giant Hornets out of 5: