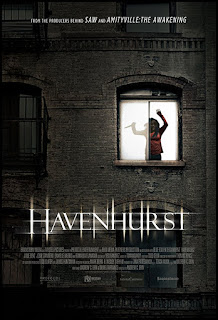 UGGGHHHHHHH!  I can't even write a proper introduction to this film because I just want to tear into how bad it was.  It's going to be that kind of review.  Prepare your butthole for the tragedy that is Havenhurst.

Working as a strange halfway house, Havenhurst is a large apartment building where as long as you remain clean from your vice or villainy then you can remain as long as you like.  However, should you dip your toe back in, then you will be given an eviction notice, only the evicted never actually leave the building.  We find this out as Jamie comes to try and find her sister Jackie that has disappeared after being supposedly "evicted."  With the help of a young girl named Sarah she finds notes and photos left by Jackie that show the building shifting and changing.  Hidden doors, rooms changing size, and passages between the walls all point to a weird combination of Dr. Satan and H.H. Holmes.

Speaking of H.H. Holmes, two of my notes in order just say "weird H.H. Holmes style traps / never mind, there's H.H. Holmes stuff."  They just straight up make this a relative of Mr. Holmes with a secret room full of books, plans, and paper clippings from him.  I'm not sure why but this reveal just pissed me off.  It didn't help that this movie was pretty boring and just made me want to watch American Horror Story Hotel instead as it had a much greater depth.

One of the sons being this strange Dr. Satan character with weird arm attachments didn't help either.  Then they try to sneak in this semi-unexpected heel turn at the end but at that point I was already balls deep in cleaning my living room and the movie was just background noise.  This movie exists as one of those films that bland ass 35+ white women would watch at night, in the dark, with a glass of whatever wine they drown their 9-to-5 life in and then they tell their friends it was amazing, scary, and such a psychological thriller!  I tell my friends this is a fart after you've had too much sashimi!

I give Havenhurst 0 plates of delicious sashimi out of 5: