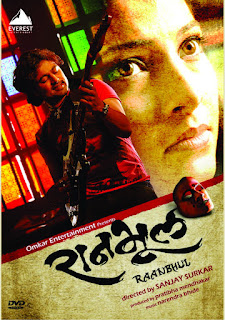 Some people say that you can learn something from every experience you have.  I think that after watching this film the only thing I learned was to not trust dudes that wear tie dye and play guitar.  This isn't really new information for me.  I talk shit on hippies all the time.  So maybe this film didn't teach me anything, but rather just reaffirmed my dislike of hippies.

Ranbhool is an Indian film in which a man believes his music is essentially the music of god.  He is such a religious zealot over this thought that he has killed people that have prevented his music from getting out or say that they don't hear the message of god in it.  A teenage girl goes to her father's home with her younger sister and a friend and make contact with this crazy guy via the internet (as ya' do).  Using an Omegle style chat they view a video stream of him playing his music, but they miss him murdering his fiancé.  Everyone tracks everyone else down and it ends with hostages, a standoff, and someone's grandmother getting called in to stop all this shit!

This was not a film for me.  Pushing close to two hours is actually short for most of the Indian films I've watched but this one just kept drawing out scenes for too long.  We get a lot of our killer playing his music but it is literally just the same song over and over again with him jamming on some changes.  It's not even a good song!  I mean, maybe I'm missing the voice of god or whatever in it, but it was just sounded like shitty Phish, and I already hate Phish so imagine that!  I will say there is one moment I liked and it's right after he kills his fiancé and then he plays a guitar solo over her corpse.  That was one of the most metal things I've been privy to in a film.  Too bad it was a hippie solo!

I give Ranbhool 1 dirty hippy out of 5: