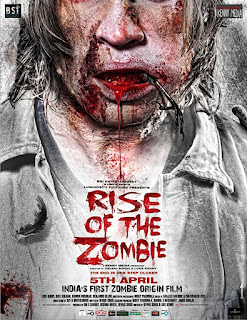 I've been trying to understand why films from India will switch so freely between English and Hindi.  At first I assumed it was just phrases or certain words that don't translate well, such as when English bleeds into Japanese or Spanish.  I actually did some quick research (read as: Google) to find out that the reason this happens is that a lot of India, especially the youth, tend to be bilingual.  In addition to this, when something needs to be stressed for emphasis a person will say a phrase in Hindi and then repeat the same phrase in English, which is prominent in early parts of this film.  Now that you've learned so much, "what film" you ask?

Rise of the Zombie (not to be confused with the Danny Trejo film Rise of the Zombies) is apparently India's first zombie origin film.  At least that's what the poster says.  As a nature photographer, Neil's work takes him to remote and unreachable places for long periods of time.  After returning from one of his trips, his girlfriend dumps him.  Not to be slowed down, he sets out on his next trip only to be bit by some flying insect.  The wound becomes grossly infected but Neil thinks that just dumping water on it is enough to help.  Over time he begins to feel himself change.  He loses control of his urges and craves raw meat, all while he thinks about the good times he used to have with his ex.

Despite having the name "Zombie" in the title, the horror elements are few and far between.  Most of the film focuses on Neil and his emotional state in regards to his break-up while simultaneously having this slow transformation from man, to cannibal, to something I guess you can classify as a zombie.  I feel like it's a very loose use of the term here.

I wasn't really wowed by Rise of the Zombie.  I like that it tried to do something different and have ride sidecar to Neil's change, but it was far too slow and frustrating.  Why he assumed he could just keep dumping water on his arm makes no sense to me.  He went into a nearby town to buy supplies and use a phone which I assume he could've found a doctor or something close to one there to tell him "Yooooooo!  You need to get yo' ass to the hospital!"  The break-up also serves no real purpose except for someone to spark the search for him when he's been missing for too long, which is still weird because she broke up with him and is then all up in his business again.  Who knows?  I don't.

I give Rise of the Zombie 1.5 Rise Against albums out of 5: