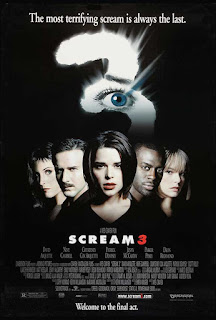 Up front, I love the original Scream trilogy.  The fourth installment was okay but it came a bit too late for me me to associate it with the first three.  I, however, completely forgot about everything in this movie except for who the killer was.  I spent half of the movie texting my husband things like "Parker Posey is in this?!  Jay and Silent Bob are in this?!  What the hell is this film?!"

Scream 3 centers around the filming of the movie's meta cinema, Stab 3.  After Cotton Weary (now a talk show host) and his girlfriend are murdered, the deaths begin to follow the script for the latest Stab installment.  Gail Weathers is instantly there, Dewey happens to be there as a consultant, and Sidney is in hiding and using a false name after the second film.  Eventually the murderer ferrets Sidney out of hiding and she joins the rest of the group to find the killer and try to end things once and for all.

Scream was one of the first major films to really play with meta concepts when it comes to horror.  Through Randy, it established the parameters for what to do and not do.  With Randy having been killed in the previous film, we still get his video store wisdom with the help of a VHS that he left.  I feel like them keeping this consistent, even with poor Randy's death, was a good touch on Wes Craven's part.  The acting from everyone in Scream 3 remains solid which was great to see.  A lot of the time, as a series goes on, the actors begin to phone it in. *cough*WesleySnipesBlade*cough*

There are some over the top moments in this film that are eye rolling but it's all part of the fun of watching a horror movie that establishes up front that it knows it's a horror movie.  I will say that the bow they use to wrap everything up does skate that line of "Oh, fuck you!" once you get how this ties back to the first movie.  Sidney sums it up best though while we're getting the killer's "poor me" speech by saying "I heard this shit before!  Why don't you take some fucking responsibility!"  Honestly, all these murders could have been avoided if just one person would've gone for therapy for their mommy issues.  Actually, I take that back, all of this could've been avoided if Hollywood wasn't a skeezy place.