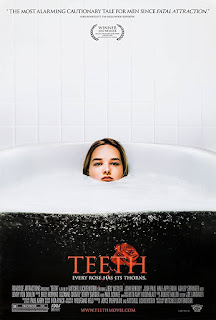 One of my go-to jokes when people ask me why I'm gay (as if there were some quick-time event that I hit the "dicks" button for) is because "vaginas have teeth."  While I know this isn't true, I think that the idea of something like human teeth (especially baby teeth) inside of the vulva causes most people to cringe.  So when we're given a film like Teeth, does it have the bite to it that we're looking for?  I'm sorry, that was terrible.

Okay, here's what you need to know about Teeth.  A teenage girl that grew up near a Photoshopped set of nuclear cooling towers is one of the faces for the local abstinence and purity ring group.  The state that they live in puts giant gold stickers over the female sex organs in their school books so our virginal girl doesn't know that she has the dreaded Vaginal Dentata!  It's a real mythological thing so look it up if you're bored. Eventually she begins to give in to temptation only to find herself about to be sexually assaulted when her extra chompers tear off her attacker's dick.  The rest of this film is her learning to actually use them for her greater good!  Seriously.

Here are my takeaways from this movie: 1) All men are indeed scum, 2) virginity is still not a real thing and is only a social construct in which parents lie to their children that "love" is the only thing that makes sex pleasurable, 3) I forgot that purity rings are meant to be a placeholder for a wedding ring which made me unreasonable annoyed.

Teeth started out as the b-movie it knew it was but by the third act wanted to take a more serious role and that ends up killing it for me.  I don't feel like the heel-turn was needed with the guy that she has pleasurable sex with.  I don't think the stuff with the mother was necessary, even as a vehicle of you sinned and this is your punishment.  And I don't think we needed a huge set-up to make her step brother an even bigger piece of shit.  Speaking of which, once again we get terrible tattoos that look as though they were drawn in by a marker just before the call of "action!"  Stop that shit!  Look at someone with tattoos!  If you need reference I'll send you pictures of my arms (or more if you want to pay... but I'm not cheap!).

I don't know.  I wasn't expecting much and I was let down.  It's sad too because I was onboard when I hit play.  I love terrible b-movies!  It was here, the plot was here!  It started out like it!  Then you tried and it ruined everything!  Let this be a lesson!  Don't try anything!  Just do it!

I give Teeth 1 dental dummy out of 5: