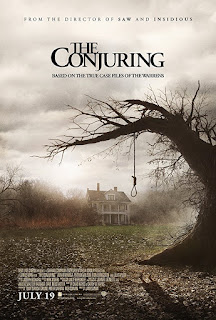 I find the Warren's to be fascinating people, and I mean this in the most neutral and scientific sense.  While they were a power couple of paranormal and demonology, there always remains a thread of skepticism with their cases that someone is trying to pull.  Others in their field have denounced them or claimed they were exaggerating cases.  Prior to this, most people know them from the Amityville Horror case or seeing Lorraine on Paranormal State, and in a way maybe the pop culture association has done more harm than good.  With that said, I was excited when this film was going to come out because I was hoping it was going to pull back some of the veil on their work.  Instead it spawned a spin-off and sequel which I feel is more damning than Baal on holiday.

We start The Conjuring by getting a brief telling of Annabelle, a spirit that inhabits a creepy porcelain doll (in real life it's just a Raggedy Ann doll).  This is more to give us a lead-in to the Warrens as they're approached after speaking at a college and asked to come to a possibly haunted house.  The rest of the film is a mix of the family living in the home, the team investigating, and some personal life of the Warrens.

This film should really just be called "Jump Scares: The Movie."  Existing as much more of a paranormal drama, it's mostly figures popping out and loud noises ensconced in a supermarket paperback.  The only scare I liked was the sheet being blown off the clothesline and taking the form of a person before flying up to a window and then away.  I don't think it's coming back either.  We'll miss you sheet, we barely knew you.

I do want to rant about one thing here:  At the beginning we're given some text about the Annabelle doll and how the story was locked away until now.  Okay, first, that fucking doll is the most well known thing in their collection.  You can go to any paranormal website and there's probably a page on it.  They claim it caused a motorcycle accident with someone that made fun of it.  Before this film, if you Googled the Warrens you would see that fucking doll!  They do fucking tours of their haunted object museum!!!  Kiss my ass "locked away until now."

Okay, rant over, but so is my love for this film.  It wasn't what I hoped for when it first came out.  There are too many artistic liberties taken via Hollywood and at the same time I found myself bored.  If you're trying to make something scarier and instead I'm looking up haunted objects on Ebay then you failed!  I would be interested in a movie on this supposed Djinn trapped in a ring that will make you a sexual beast!  That can be The Conjuring 3: The Ring!  Only $49.99, with free shipping!

I give The Conjuring 1 picture of the real Annabelle out of 5: