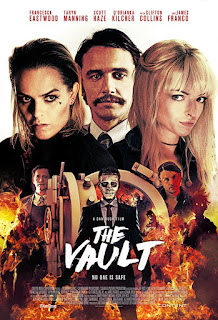 I feel like film production companies still have this odd assumption that casting people based on name or affiliation alone will make a movie good (or at least draw).  We know this isn't true based on some of the big flops that have existed *cough*TomCruiseMummy*cough* but yet we still get these middle of the road, or worse, films that have some heavy casting done.  I would rather these companies save their money and give us a better film rather than wasting that dough of what is essentially turd polish.

The Vault focuses on a bank robbery gone dumb and the eventual release of ghosts in the bank?  I think.  Or the bank was just haunted and opening the second vault made it more haunted?  All I know is that people have quit this bank due to the weird things that happen around the downstairs where the old vault exists.  In the 80's a bank robbery went wrong and it lead to the death of pretty much everyone involved except the unaccounted for leader.  They all haunt that downstairs now but may be locked in that vault.  Either way, this odd group of white trash (including the woman that plays Pennsyltucky from Orange is the New Black) stir up some shit and end up dead thanks to these bland specters.

That's the whole film pretty much.  We do find out that the person that points them to the vault and attempts to save everyone is the ghost of the bank manager from that original robbery, but you could kind of tell that by his porn stashe and outdated suit.  I was bored the whole way through The Vault.  It has what could be labeled the worst use of the song Crimson and Clover, jailhouse tats that look like they were Sharpied on just prior to filming, and a Wilhelm scream.  A fucking Wilhelm scream in a 2017 film!  How hard is it to have someone record their own death scream?

I can't with this film.  I really can't.  Hopefully that vault actually exists so they can take all the copies of this film and lock it inside.  Then if anyone opens it they're haunted by this film for the rest of their life.