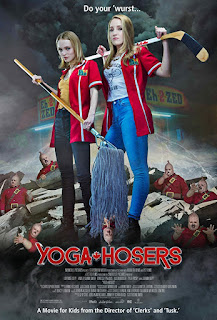 Back when I was a teenager my mom took me to a Blockbuster to rent some movies and in the process she bought me used copies of Clerks and Mallrats on VHS (as if this story wasn't already dated).  I had never seen either, didn't know they were the same director, I just heard that they were good.  I was instantly hooked.  So much so that I have friendships that were solidified thanks in part to a mutual love of Kevin Smith films.  Anything that he's released under his View Askew productions I own and love (except Jersey Girl but I don't need to defend my negative views on that).  So going into Yoga Hosers I had high hopes... probably too high.

Yoga Hosers takes place in the future of the Tusk universe.  When they're not closing it to have band practice in the back, Colleen and Colleen (Harley Quinn Smith and Lily-Rose Depp) continue to work at their lame convenience store .  The Colleens get invited to a grade 12 party by two boys, but are forced to work that night.  In retaliation for this unscheduled shift, they close the store and invite the boys to party at the store.  This male duo actually faked the party with plans to sacrifice the Colleens to Satan.  Rather than our dark lord getting these girls souls, Bratzis (tiny Nazi bratwurst men), end up killing the would-be Satanists through anal violation.  This leads to a whole thing about a secret Canadian Nazi base under the Eh-2-Zed and a giant meat monster that gets defeated by yoga.

Mr. Smith, should you ever come across this review, plus understand I'm not trying to be mean, I'm still a fan of your work, but what in the ever lasting fuck was this film?!  The plot passes absurd and isn't even funny.  Every single one of the jokes is ham-fisted with this "See this joke?!  DO YOU SEE IT! IT'S A JOKE!" delivery behind it.  This is extra strong when it comes to anything pointing at the fact that this is in Canada, including bad accents.  There are callbacks to his previous films, including the obligatory "I'm not even supposed to be here today," but it felt dirty.  It made me have that feeling I get now when I see they're rebooting a cartoon or movie series strictly for that nostalgia grab.

The one shining light in this film, at least for me, was Justin Long's hilarious Yoga poses and terms.  Other than that, this just didn't do it for me.  It saw the shark from the start and just took a running leap over it.

I give Yoga Hosers 1 Mario Lemieux out of 5: