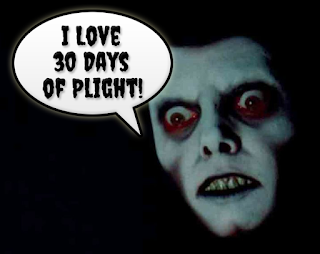 I can't believe I've watched and reviewed 300 films for this website already (more if you count the Saturday Screamers now).  When I started doing this I didn't really have an expected timeline of how long I was going to work on this, but it has been over two years thus far and I'm not really slowing down.  Instead I keep looking for more to add to this, which I think is what a person is supposed to do but I'm not sure.  I'm just going with what feels right.

That said, we're wrapping up our 9th Cut.  This has probably been one of our better Cuts as far as having films I actually liked.  We started with The Lost Boys, had The Devil's Candy, and the over-the-top Daemonium: Soldiers of the Underworld which were probably my stand outs.  On the flip side, there are still those films that made me lose my goddamn mind while slogging through their absurd attempts at film making (not that I have ever written or made a film, but isn't that what makes critics great?  Even then that doesn't count for much because Roger Ebert wrote Beyond the Valley of the Dolls, so...).  The unnecessary Cabin Fever remake and Welcome to Willits come to mind right away for the shallow end of the pool.

So what's coming up with 30 Days of Plight?  Well, this is our break period but I'm going to try to keep up with at least one update a week, even if it's just a Saturday Screamer because I have a few more screeners to work through.  Also, I've been having a lot of trouble with Netflix when it comes to the D&D dice roll choice formula.  Having watched 300 films, anytime I roll a number greater than 30 then most of the films listed I've already watched.  So what does this mean for the 10th Cut?  Well, since we're entering double digits I'm going to do a special cut.  Over the years I've amassed a ton of questionable films that I haven't had the chance to watch.  In order to let Netflix catch up, and catch up myself, I'm going into the 30 Days of Plight video archives and pulling 30 random films from that for the 10th Cut.

Most of these films are going to be things I've picked up from $1 bins, used DVD stores, or exist on cheap movie multi-packs.  So get ready for a ton of shit you might never have heard of.  I already know of one that I have that stars Fred Durst so that just lets you know what to expect.

So Monday September 10th will be the start of our 10th Cut.

If you want to reach out to 30 Days of Plight you can do so via our Twitter @30daysofplight or e-mail us at 30DaysOfPlight@gmail.com.

If you are a film company, director, producer, actor, special effects person, whatever, and want some help to promote your upcoming project or would like a review of your film then e-mail me at the address above and we can set something up.

Thanks again to everyone that's been visiting and reading this website.  In this time we've had almost 33,000 visitors and that blows my mind.  And, as always...