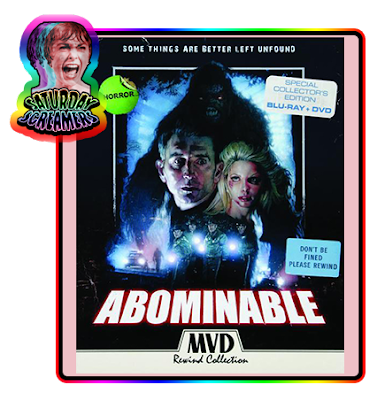 We're coming back at you with another Saturday Screamers!  This time we're going to talk about the MVD 2-disc release of the 2006 film Abominable as well as the extras included.  A quick shout out to MVD for hooking us up with a copy of this to review.  You may remember that they sent us last week's The Return of Swamp Thing.

In the "making of" featurette with this film, the director (Chris Schifrin) sums Abominable up perfectly:  What if a monster movie met Rear Window?  After a climbing accident killed his wife and left him in a wheelchair, Preston returns to his cabin in an attempt to overcome his trauma.  A group of college aged girls arrive to spend the weekend at the cabin next door.  Preston just happens to see a large beast drag one of the girls away in the night but he isn't accustomed enough to his condition in order to warn the other girls and no one else will believe him.  Can he save himself and the girls before this sasquatch claims them all?!

This movie has some star power in it.  Rex Linn, Lance Henriksen, Matt McCoy, Paul Gleason, scream queen Tiffany Shepis, and Herbert West himself, fucking Jeffrey Combs!  The film poster/cover was done by Drew Struzan who you might know from doing the Indiana Jones, Star Wars, and Harry Potter movie posters.  It's just an odd collection of who's who.

As for the Abominable as a film, I have an oddly specific way to describe it.  It made me think of being a teenager in the 90's and being stuck inside on a rainy Saturday afternoon.  This is the kind of movie that I would end up watching on the USA Network at like 2p during those kind of days.  It's a B-movie with a little bit of budget and clout.  The practical effects and the monster all look great and the acting is solid as a rock.  My only complaint is a small one and that's in the beginning when the farmer couple goes to check a noise they assume is coyotes there's a shot of the wife shining a flashlight in the tree tops.  What fucking flying coyotes are you looking for?!

This release has a great set of extras.  We have the "making of" I mentioned above, some deleted scenes, and a short blooper reel.  There are also two short films added on.  The first being a student film Chris did entitled Shadows which, let's be honest is capital "S" Student film.

The other short though is what makes all of these already great extras even better.  The second is an adaptation of a comic book I never heard before named The Adventures of Basil and Moebius.  What starts off seeming as a heist at a private high-roller apartment casino turns supernatural as fuck quick.  With Ray Park (Darth Maul) as one of the leads, Malcolm McDowell in a crime boss roll, Kane Hodder playing a goon and a monster, and a monkey fighting with a straight razor, you're in for a good time!

If you like cheesy monster movies then this set is a must.  Amazon currently has this set around $20 so if you click on the link there then you can pick it up and also help out the site because we are part of Amazon Associates and any money from that goes into paying our domain name fees and energy drinks.

Thanks again to MVD for sending us this disc for review.  If you have a horror film or book release that you would like us to review, or you just want to say "hi," you can reach us at 30daysofplight@gmail.com.
Posted by J. Cimba at 2:00 AM