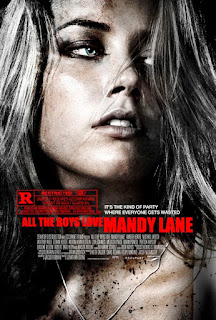 The title of this is kind of misleading.  The boys don't really "love" Mandy Lane, but that sounds better than "All the Boys Think With Their Dicks and Objectify Mandy Lane As Some Sort of Reverse Sword in the Stone, Where the Swords are their Dicks and the Stone Is Her Lady Parts."  Fuckin' teenage boys are gross.  I feel shame that I was ever a teenage male, and I don't even like women!  They have cooties!

All the Boys Love Mandy Lane focuses around (surprise surprise) Mandy Lane!  When her best friend (at the time) convinces the biggest of jocks that to woo Mandy he must drunkenly jump from the roof of his house into the pool, things don't quite work out that way.  One massive head trauma and a year later finds their friendship a thing of the past, and Mandy's current friends are inviting her to a farmhouse for a end of junior year party.  En route to the party, every male that isn't around Mandy at the time makes their intention known that they want to attempt to parade their dick through her thorofare.  At least, those are the plans until people start dying.

Straight up (now tell me) this movie is awful.  It's filler in the sense that (I assume) this studio had space to crap something out and we got this.  If this film were a bit older it would've been straight to VHS with a cover that would be a million times cooler than this movie could ever hope to be.  The plot is incredibly generic and predictable.  It's a b-movie with a budget and because of that it suffers the fate of looking nice while suffering greatly on content.

Most of these actors look like if they showed up for a high school junior class then the cops would be called on them.  What's even worse is that at the party in the beginning of the film, for the end of the sophomore year, the jock guy looks like he's someone's fucking dad!  This movie should be called  "Hello, Child Protective Services?  A group of adults are creeping in our high school and all the men seem like they're potential rapists!"  Fuckin' trash flavored trash!

I give All the Boys Love Mandy Lane 0 Mandy Ln street signs out of 5: