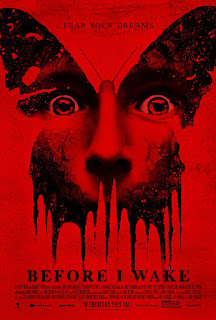 I've been having some serious issues with insomnia lately, so getting a film that revolves around sleeping is partially infuriating and partially calming.  The former because I'm jealous, but latter because at least I don't have to deal with the crap that they put up with in this film!

Before I Wake has our picturesque couple of Mark and Jessie.  They lost their son due to an accident and decided to adopt a boy that is around that age.  Enter Cody, an adorable boy that likes butterflies, has a shoe box full of caffeine pills, and comes with some serious emotional baggage.  You see, when Cody sleeps, his dreams become real, but so do his nightmares...

When I started watching this I was expecting it to fall into the void of generic book club-esq horror.  Where it had a scare element but the script was very cookie cutter.  Luckily, as I progressed through my viewing those fears fell by the wayside because everything leads up to a really well thought out explanation.  It also avoids having this happy ending.  Instead it takes what we have left and leaves us with a realistic (or at least as realistic as a movie with a dream child in it) "we'll make the best of this" ending.

I will say that Before I Wake does have some lulls in its story progressing and our first view of the nightmare creature had me making jokes about the alien from Signs haunting this kid, but all in all this is a solid film.  Child actors are also a coin flip if you're going to have a solid one or not and the kid that plays Cody definitely pulls his weight.  Watch this with your partner on the couch in the dark and you'll probably both enjoy it.  That is unless your baseline for horror is something like that Texas Chainsaw movie with Renee Zellweger.