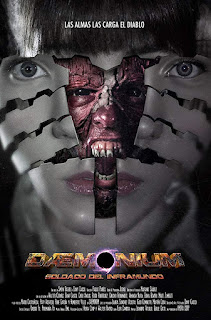 FUUUUUUUUUUUUUUUU! If there's one thing I love it's over the top Japanese horror.  It's strange then that this film comes to us from Argentina because if you switched out the Spanish for Japanese then I would have assumed this was 100% Japan A-Number-One!  Most of my notes for this movie start with "HOLY FUCK" or "OH SHIT" and then end in exclamation points, so let's get into it.

Daemonium: Soldier of the Underworld is a mix of the supernatural and modern-apocalyptic cyberpunk.  That's a lot to take in, but trust me, that's the only way I can describe it.  A wizard is hired by some military operation to summon a demon in order to make a trade for power.  The wizard does it but the leader of the group chose not to follow the instructions he was given.  This leads to the demon (looking like a mix between Mumra and the offspring of Darth Maul and a sand person) killing almost everyone, but making a deal with one survivor named Razor.  Razor becomes a powerful man but has four bodyguards created in order to protect him from the return of the Demon to collect Razor's life.  The wizard is being hunted, Razor is a military tyrant, and demons are controlled by humans with sick shit like gatling guns for arms.

This movie has everything!  Great make-up so that each of the demons on screen is different, katana fights, Japanese rope bondage, school girl outfits, and a final fight straight out of a manga with rad dive kicks and Ora! Ora! Ora! punches!  The costuming varies from Shadowrun to Colonial America and everything in between.  I've never had two hours fly by as fast as they did with this film and I would've wasted another hour taking everything this film had to give.

The plot is a bit of a loose thread.  It could easily unravel the whole thing but luckily no one pulls on it so we still get a cohesive story.  Besides, when you're watching people explode and sick fight scenes then it doesn't matter!

I give Daemonium: Soldier of the Underworld 5 Gendo Ikari's out of 5: