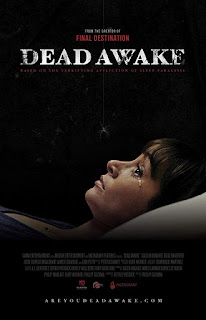 Yes! Back-to-back movies about sleep during my insomnia period!  I feel like Netflix is either pulling one of those "well, have you tried falling asleep" moments or, inversely, is trying to point out all the horrible things that can happen when one sleeps.  Either way, you are not helpful nor are you a doctor Netflix, so get off my sleep dick!

A long time ago I covered a documentary about Old Hag Syndrome/sleep paralysis called The Nightmare.  If you aren't familiar with Old Hag Syndrome it takes its name from an antiquated belief that if you had sleep paralysis then it was an old witch that was sitting on your chest and preventing you from moving.  This is our focus with Dead Awake.  Kate (or Beth, I forget as the same woman plays both of them) wakes up at night with the feeling that something is watching her and keeping her from moving.  After a weird birthday party where a woman literally stops the music to gossip about her husband that is in the room, Kate has a freak out where she shares a bit about her experiences.  Beth kind of believes her and after Kate dies in her sleep Beth begins to have the same experiences.  When Lori Petty is unable to give her answers she seeks out some semi-new age weirdo that claims he can help and tried to help her sister before Take Girl told her to avoid him.

Up front this movie gets very Nightmare on Elm Street, but not so much that it kills it.  What kills it is that Dead Awake is kind of boring.  Don't get me wrong, there are some scenes in this film that did it justice but not enough to create a comfortable set of peaks and valleys.  For example, the creature doing a Ring crawl up the hallway to the bed or the spider falling from the ceiling to land on Kate's open eyeball were each squirm worthy in their own way.  Yet these are two moments in what is endless research and Lori Petty not driving a tank and chugging a beer to fight this thing.  Sorry, but I fucking love Tank Girl.

I give Dead Awake 2 copies of Tank Girl out of 5: