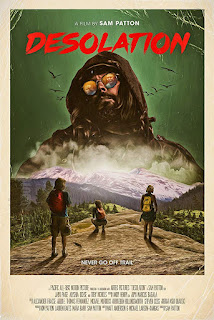 I don't have a child, but if this film has taught me anything it's that before I ever let said imaginary future child to go camping with me or someone else then I'm going to make them watch both Predator and First Blood just so they're prepared for anything!  You need to hide from something trying to kill you?  Cover yourself in mud and let all the rad traps you set take that mother fucker out!  I don't care if you're five!  Protect your neck, non-binary imaginary child!

Desolation is a journey of letting go.  A mother and son go hiking in the mountains in order to spread the ashes of their recently deceased husband/father.  Armed with bear mace and a family friend, they begin to be stalked by woodland Rob Zombie for an undefined reason.  After the friend is stolen in the night the mom and son combo realize they have to escape before they're forced to listen to Living Dead Girl until they die.

I don't know what to classify this movie as.  It feels like it would be a terrible home invasion film if this took place in a house, so Forest Invasion?  Woodland Survival Horror?  Scout Horror?  Woods of 1000 Corpses?  Okay, that was the last one.  While there is this whole plot of the stranger hunting them the real plot of this film is that the son just wants to be recognized as being a teenager, and thus no longer a child.  You feel for the mother, having lost her husband and thus wanting to protect her son but you can't be emotionally dismissive or else he's going to learn to resent you!  Go to therapy!  With that in mind, the boy does prove to his mother that he is now more man than child and eventually bludgeons Rob Zombies head to pieces with a rock.  I get it, you're working through some shit as well kid, but damn... you need to go to therapy too.

I give Desolation 2 copies of Hellbilly Deluxe out of 5: