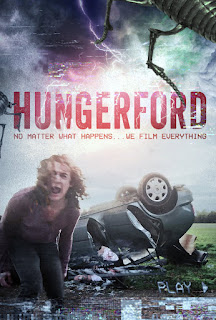 I don't know about you, but if I were an alien planning some sort of invasion I don't think that I would start in a small UK town.  The idea of starting low key in a suburb is good; less people to notice, easy to take over an area quickly, etc.  I just don't feel like picking somewhere on a large island would work out well in the long run.  Unless it was Australia and then you learned to weaponize the hellscape of fauna that exist there.  You know, this is all if I were planning an alien invasion...

Hungerford is set in the UK, where a film student decides to film every aspect of his life for an entire week.  It just so happens that this week is the one where a parasitic alien race decided to start invading the Earth via his small town.  Armed with cans of deodorant, an axe, and a camera, our film student and his flat mates all set out to secure a love interest while attempting to fend off these alien brain slugs.

This movie felt like it was a really long trailer for a video game.  The ending came and I felt like I needed to pick up my PS4 controller to help them fight off the invading hoard.  With that in mind, Hungerford does toe that Shaun of the Dead line.  It just lacks the humor and charm that Shaun has.  I think they realized this too during filming because there is a mention of Shaun of the Dead by name.

Hungerford is a bit slow and we're given a lot of shaky cam footage which gives us zero visual content.  Otherwise, Hungerford is pretty solid.  By the end, it satisfied me enough to be pleased but left me open to wanting more.  I doubt that sequel will ever come, but I'll throw in a few bucks to a Kickstarter or whatever if they announce it.

I do want to address that this movie sent me down a huge personal research spiral because I couldn't remember what movie, TV show, book, comic, or video game had a similar type of alien.  Something that was invisible until the connection was broken, slug-like, and controlled the host through the back of the neck.  The closest I found was 1994's The Puppet Masters but that's not what I'm thinking of.  For some reason I keep thinking it might be in an episode of Buffy the Vampire Slayer, but that feels wrong too.  So if anyone knows what I might be thinking of (as that's not vague at all) please hit me up on Twitter @30daysofplight or e-mail me at 30daysofplight@gmail.com because it's driving me insane!

I give Hungerford 3 Eldritch Parasite MTG cards out of 5: