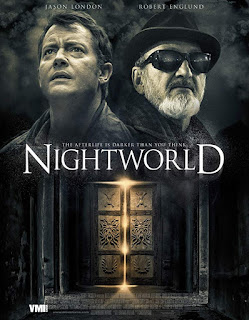 My very first note for this film is "Yassssssss queen!  Robert Englund!"  I don't know why I get so hyped when he is in a film.  He's a good actor, he played one of the greatest slashers ever, but I feel like most of his roles could be anyone else and it would be just as fine... except Dance of the Dead.  I fucking love him in that film, no matter how short his screen time is.

Nightworld is the most "I hung out on Creepypast.org and then wrote a script," film that's come across my screen in a while.  A man goes to Russia for a simple watchman job.  He's told that each of the apartments are occupied (they're not) but his main duties are to lock the gates at 11p and spend most of his day watching camera monitors set up in an underground hanger.  If anything ever happens on those cameras, he is to call Robert Englund.  He is the previous watchman that eventually went blind.  After a bunch of whatever and nothing, something happens and then we find out that the hanger has a door that is one of the seven seals between the living and the dead.  If the door's guardian (an old man on machines in the attic) dies then the door could be opened and the dead could return.

This movie was boring.  I said that this is like a creepy pasta but it's a shitty creepy pasta.  As things were getting revealed I would exclaim "Of fucking course!" because you knew something like that was going to come up.  A random love story is thrown into the mix, which I assume is just to add an extra character for the final confrontation.  The character development is incredibly weak.  Robert just lost his eyesight due to age, our main character is there because his wife died, the love interest is there because she works at the cafe.  That's it!  There's no meat here to dig my teeth into, just bones.

I give Nightworld 0 blind Robert Englunds out of 5: