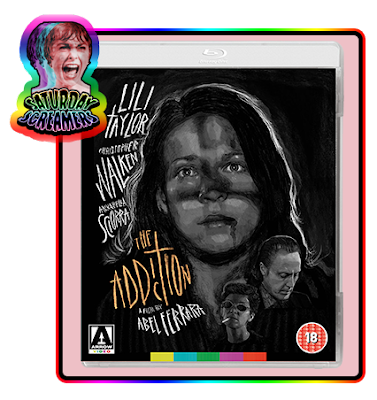 Chalking up another entry with our Saturday Screamers is Arrow Films' release of the 1995 movie, The Addiction. Thanks to Arrow Films for hooking us up with this screener copy to review.

Shot entirely in black and white, The Addiction is a vampire film that makes no effort to hide the fact that this affliction is a metaphor for heroin addiction.  Kathleen (Lili Taylor) is working toward a doctorate in philosophy.  One evening Kathleen is pulled into an alley by Cassanova (Annabella Sciorra) and is given a chance to tell Cassanova to leave.  When she doesn't, Cassanova bites her and leaves while telling her everything is about to change.  From here Kathleen begins to fiend, injects blood she takes from homeless people, and starts dressing and acting like Lou Reed, just with intense philosophical monologues.

This film took a bit to grow on me.  Initially the philosophy was heavy handed and it made me feel like I was watching a Jim Jarmusch film that lacked any mirth.  The turn around here came when Christopher Walken was introduced in what may now be one of my top 5 Walken roles.  His character initiates this vacuum where everyone and everything start coming together for the climax.  The earlier philosophical exposition becomes justified when Kathleen is defending her dissertation and makes a point of philosophy being nothing more than propaganda of a single individual.  The very end in which spiritual salvation leads to freedom from the affliction might as well have been an AA/NA commercial, but seeing as how Kathleen is unable to control her habit, it's what works for her (and in this case, some people dealing with addiction issues).  So who am I to sit here and talk shit on something that works for people?

Aside from top notch casting in The Addiction, it's also directed by Abel Ferrara.  You may know him for his work on Body Snatchers, Bad Lieutenant, and Ms. 45.  Additionally, Russell Simmons of Def Jam records was a producer.  I have nothing against Mr. Simmons and everything Def Jam has done, but my biggest complaint with The Addiction is that the only non-score music we get is hip hop and it feels so incredibly out of place.  That, and the fact we get the same Cypress Hill song played twice for street shots is too much.

In comparison to some of the extras we covered with other Saturday Screemers, The Addiction is tamer and geared more toward the film geek side.  We have a new interview with Abel Ferrara as well as director commentary, an interview with Brad Stevens (film critic) who wrote Abel Ferrara: The Moral Vision, and a series of interviews entitled Talking with the Vampires.  The Talking with the Vampires was my favorite of the extras as it was made specifically for this release and features Lili Taylor, Christopher Walken, Abel Ferrara, cinematographer Ken Kelsch, and composer Joe Delia.  It felt very relaxed, like a conversation between friends.  You find out things like Lili was listening to Debaser by The Pixies a lot while making this film, or Christopher Walken singing a song for Abel.

First pressings of disc also come with an illustrated collector's booklet which has new writings on The Addiction by critic Michael Ewins.

If you're a fan of vampire films then I definitely recommend picking this one up.  I didn't know this film even existed until I was sent this disc but it's well worth the time.  Thanks again to Arrow Films for sending us this for review.

If you want to pick up this blu-ray then you can click here and get it from Amazon.  It's currently around $25 and if you want to get the collector's booklet then I definitely recommend getting it soon.  Also, if you click on that link or the link above for Brad Stevens' book and buy either from those links then we here at 30 Days of Plight get a small part of that sale and it goes towards paying for this website and energy drinks.
Posted by J. Cimba at 9:22 AM