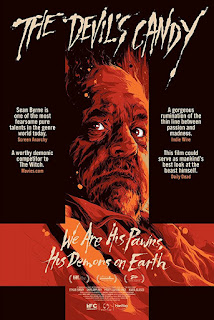 All this time and metal got it wrong.  Satan doesn't like super fast riffs or growling vocals coming from someone in corpse paint, he just wants a single drop-D chord played in the most boring manner over and over.  That, and apparently child murder, which I didn't sign up for when I started listening to Gorgoroth.

The Devil's Candy might be one of the most metal horror movies I've ever watched.  A small family move into a cheap farmhouse where two old people were killed by their son (which I thought was Kyle Gass for part of this film, but isn't).  The father is a painter and a semi-serious metal head.  After moving into the house, the father begins to hear strange music from the walls and has moments where he blacks out while painting only to come to and see he's created some of the sickest shit ever put on a canvas.  Connected to the murderous son, the father and family are now faced with something straight out of some Dark Throne lyrics.

As a whole, The Devil's Candy is a total package for a horror film.  We have solid and down-to-earth characters being wrapped up in this supernatural element and having to fight back against that.  They do too.  Holy fuck do they and we get a rad final death.  It's so rad that I almost stopped typing to throw up the horns so you know it's metal as fuck!

My favorite thing in The Devil's Candy is the art gallery where the father is trying to get shown is named Belial.  Belial is a fallen angel that is said to have been created after Lucifer and is possibly the first angel to fall to Earth during the angelic revolt.  The owner of the gallery talks of being "represented by Belial" and having to "sacrifice," basically in order to gain material wealth.  I thought it was a good touch.

I give The Devil's Candy 5 Emperor albums out of 5: