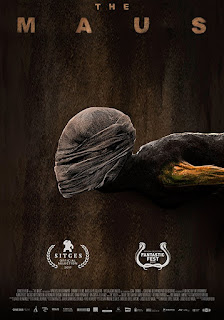 War is a horror unto itself.  The entire concept seems so foreign to a lot of us because we never served in the military and the last real war or battle fought on U.S. soil was the Civil War (with the exception of maybe Pearl Harbor).  Yet there are countries that are at war or face some form of occupation currently and their daily lives are horror, or have been horror.  PTSD, a lack of people able to trust individuals, or just the existence of misanthropy and entropy when it comes to life... it's a horror that we hope to never see.

The Maus takes us to post-war Bosnia (although this film is from Spain).  A woman and her German boyfriend returned to the country because the bodies of her parents were finally found in a mass grave and she wanted to give them a proper burial.  While en route to their flight the SUV ends up in a mine crater and unable to continue.  Two Serbs come up behind our couple while they walk on the path to get help.  Ignoring the warning the Serbs are yelling about danger ahead, the couple's dog sets off a land mine and the woman is caught in the blast.  This is where we get our first dream sequence which may be more of a premonition of dangers to come.

There's a supernatural horror element in The Maus that becomes the focus for a short time.  It's mostly used as a deus ex machina but I wish it didn't exist at all.  There is a much more visceral horror present here with the constant questioning of trust and safety, prejudice existing from growing up in a war torn area, and the dream sequences which create these incredibly uncomfortable feelings within the viewer. I think that this film makes those moments much more frightening than a supernatural being ever could.

I do have to nitpick a few things, just because they bugged me and killed my immersion in the film.  First, when the couple is walking they come across a jeep and the boyfriend finds a walkie talkie in the bag, all the while completely ignoring the gigantic CB antenna on the top of the jeep!  Use that to call for help you dolt!  Second, when we finally see the demon it looks like Gray Fox from Metal Gear Solid, just in earth tones.  It's not a bad design, but it made me more hyped for Metal Gear at that moment than this film.

All in all The Maus isn't bad, but I don't feel like it falls under horror.  Yes, I've spent most of this talking about real life physical and personal psychological horror but if I had to classify it in horror I'd say it's a dramatic horror film.  That feels awkward to say though as drama and horror don't tend to overlap but this isn't a thriller.  The real villain here is just humanity being opportunistic and shitty.