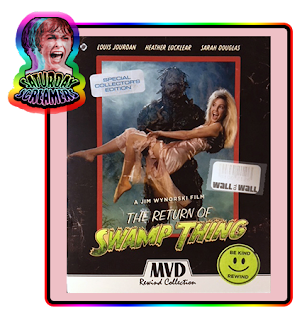 When I was a kid I used to watch the Swamp Thing TV show all the time.  So when I received a copy of The Return of Swamp thing from MVD, words can not describe how hyped I was to do a write-up about it!  So thank you MVD for not only putting this out but hooking me up with a copy for review.

While this is a sequel to the original Wes Craven (yes, Wes fucking Craven) film, The Return of Swamp thing moves away from its horror foundation and well into the realm of camp. It toes that line of crossing over into Troma-esq territory but luckily there are some amazing costumes and make-up for all of the un-men as well as Swamp Thing and no gratuitous boobs.  Don't get me wrong, Arcane does have a lot of one-piece bikini clad women with guns guarding his house, but I guess that's what you did in the swamps back then?  I don't know, I can't justify it.

The plot is pretty simple:  Arcane is trying to find a way to live forever and create Dr. Moreau style un-men.  Swamp Thing wants to stop him.  Heather Locklear comes to visit her step-father (Arcane) and speak mostly in terrible jokes.  Yet, when you bring all of this together it makes a fun film.  My only complaint are the scenes with the children which were actually added to the script by the director after the script was finished.  They do break up the flow of the film a bit.  Also, the weird psychic sex scene between Swamp Thing and Heather is really awkward to be privy to.

The extras on this disc are relatively standard.  You have your commentary tracks as well as interviews with the director, producer, editor, and score composer.  Unfortunately Swamp Thing's Dick Durock passed away a few years ago so he wasn't able to add anything to this disc.  The big thing in the extra are the two TV spots that I absolutely forgot existed.  These are anti-littering ads where the two boys from the film mumble through something about a cup floating in the swamp and Swamp Thing comes out, talks about how long it takes plastic to break down, and then thumbs up.  The second is a shorter version of the first (since the first is close to two minutes long) but they are both art in their own floundering way.

So that's The Return of Swamp Thing 2-Disc set from MVD.  I say thank you again to MVD for re-releasing this as I forgot about my love for the TV show this film spawned.  If you're a fan of campy Kaiju Big Battle-esq films then pick this one up!  You can get pick it up from Amazon right now for about $20 and if you click that link and order from it then you'll help out this site as well.