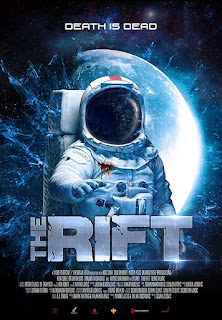 Congratulations to Serbia for finally making it our list of foreign films!  I don't know how it made its way to Netflix though.  I tried to go to the primary production company's website and my browser refused to let me go because it was an "unsecure" page.  Not that it matters that much since there are about 15 production groups associated with this film, but based on what we get, they could've given them $5 and some Subway coupons and made it in the credits...

The Rift starts out with a Liz, a mother that is in mourning for her young son.  The government doesn't care bout her loss and instead blows up her cell to say she has a mission.  Enter agent Smith, Liz's new partner.  After Liz and Smith meet they pick up two other people and head to the countryside to find a lost and crashed satellite.  Following the signal to a remote house this rag-tag group of jags end up finding an astronaut, but more importantly they find that those killed on that land will not stay dead.

The question this film left me with is why did Liz get called?  She tells us that her background is as a hacker that was arrested for hacking the NSA.  So if that's her specialization, why was she tapped to go find this astronaut under the lie of it being a satellite?  I don't think that in either case she'd be able to help.

It's an odd comparison, but The Rift reminded me a lot of Cube.  There is this sense of being trapped (as most of the film takes place at or in the house) all while avoiding death suddenly popping up.  At the same time, you have a character begin to lose his mind and attempt to pick people off in order to survive.  I wasn't a big fan of Cube so The Rift doesn't fair much better.

The Rift is just average when it comes to quality.  The end credit scene was the only thing that managed to capture my interest and I wish I had a movie focusing just on that concept rather than what we got.

I give The Rift 2 copies of The Killers "Spaceman" single out of 5: