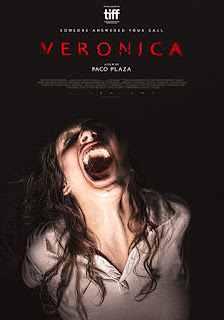 A few years back I used to work at a witchcraft store here in New Orleans.  People had no problem picking up statues of Goetic demons or objects meant to curse, but the moment they saw a spirit board/Ouija board they refused to touch it.  It's amazing how fearful people have become of press board with a decal on it and a plastic planchette.  I mention this because today's film is loosely based on a woman named Estefanía Gutiérrez Lázaro that supposedly ran afoul of a spirit board and it lead to her death.  To this day it's Spain's only officially documented police record with a focus on supernatural and the unexplained.  You can find all that info online so I won't go into it.  What I will go into is our review!!

Veronica is a Spanish film where our title character and her two friends attempt to hold a seance during an eclipse with hopes of contacting passed loved ones.  They make contact with something but in the process it seems that the spirit has latched itself to Veronica.  She and her siblings become threatened by the spirit, shadow people roam the house, and strange stains begin to appear on under their beds.  Not even the blind nun nicknamed Sister Death can help Veronica as she is told her only hope is to be able to outrun the entity surrounding her.

I've noticed that the more horror films I watch for this website, the more grizzled I become.  My skin is much thicker than it was say 10 years ago.  With that in mind, I think the younger version of myself would've been way more into this movie than I was.  There are some really decent visual effects involving hands coming out of the bed and grabbing people and shadows moving inside of the apartment.  I liked the overall story telling, it's supernatural gonzo-fiction but that's what makes it a movie and not a documentary.  My only complaint (once again) is this weird mix of magickal practices contained inside of the literature that accompanies the board.  I know, it's not meant to be some sort of "official" anything and is just this weird hodgepodge of info, but I'm pushing a pair of glasses up the bridge of my nose and scoffing like a douche at it.

I give Veronica 2.5 haunted paintings out of 5: