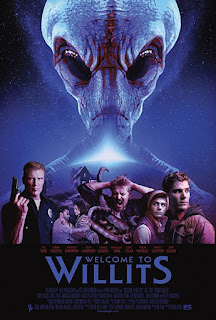 I think I can sum up my entire intro and general thoughts on this film with a single picture.  I'm very much a "do what you want" type of person, so long as you aren't hurting yourself or someone else, but there are many moments during this film where I wanted to just kind of reach over and say "maybe you've had enough."  Either way, that image to the right sums up everything:

Set in Northern California, a group of youths are heading out on a camping trip in the area of Willits.  They acquire a burnt out Rory Culkin from a gas station and find themselves set up not far from a cabin with a grow operation.  Unluckily for them, it also contains two people that have such chemical filled brains that one believes he was abducted by aliens and he assumes almost anyone he sees is one of them returning for him.

Once you realize the true horror here is chemical dependency and abuse this film isn't really that great.  I was on board when the party added Mr. Culkin, and even the over the top cop TV show (starring Dolph Lundgren) they kept showing would break things up in a fun way, but I don't know if Welcome to Willits was trying to be funny or scary or what?

This feels like the kind of movie that someone in middle school would be into, only to reach adulthood and deny that they ever liked it.  This film is to that person as Coal Chamber is to me.  Only I'm in my 30's and you can't prove I ever owned any Coal Chamber merch or CDs as all of that evidence has been disposed of... I mean, if there ever was any evidence, which there never was!

I give Welcome to Willits 1 copy of My Sexy Alien Girlfriend out of 5: