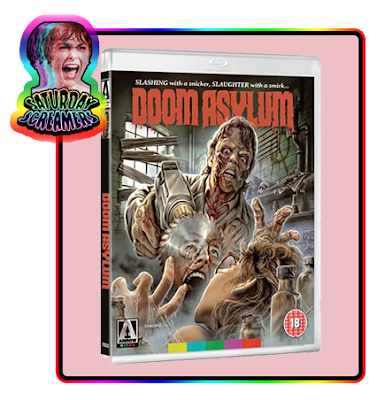 For Saturday Screamers this week we're tackling Arrow Films' blu-ray re-release of 1987's Doom Asylum.  As always, thanks to Arrow Films for sending us a copy so we can do this review!

So the official description of Doom Asylum is: "A demented coroner uses autopsy equipment to kill off the teenagers who trespass on the long-abandoned asylum he inhabits. Filmed on location in an actual abandoned asylum."  I address this because I had no clue what I watched, but I loved every second of it.

Doom Asylum is a b-movie with a capital "B."  When a coroner and his girlfriend are in an accident, with a comically long lead-up, he awakens hideously deformed and deranged.  A group of the most absurd teens(?) go to sunbathe by an abandoned asylum.  Also present in the asylum is the greatest all-female experimental noise band which might as well be the b-film version of The Misfits from Jem.  Lead by Tina (Ruth Collins), they are this film's greatest asset.  The final presence in the asylum is the coroner ghoul that ends up killing these teens in random ways, except for Tina that somehow accidentally turns herself into a meat cube,

This movie is the absolute definition of The Dio Effect: It's so cheesy and bad that it is amazing!  It's also self aware of how bad it is.  Although, when your big draw to the film was "We have a Penthouse Pet and a Playboy Playmate in our film," you know you're not swinging for the fences.  The practical effects are pretty decent despite finding out in the extras that half of them didn't work as planned.  The acting is... well... overacting and you'll hear the same cover version of House of the Rising Sun about 20 times.

Like most Arrow releases, they got together some of the cast and crew to do individual interviews to talk about their time with Doom Asylum.  We get Ruth Collins doing one and she is like the scream queen aunt you didn't know you wanted.  Cinematographer Larry Revene lets you know all the issues with the film during its production.  He doesn't talk shit though. Instead it can be seen as someone looking back and working with fresh faced amatures and where they under or over extended themselves.  The final interview is with special effects artist Vincent Guastini (who worked on my favorites The Devil's Carnival and The Devil's Carnival: Alleluia!).  He talks about his early process starting out and working on this while pulling ideas from Tom Savini books he keep with him.

We do get an older set of interviews with the director, producer, and someone else but it was about 2 A.M. when I finally got to those and wasn't in the mood, so I'll end up watching those later.  I also definitely want to revisit this film with the commentary track on.

I think that's the best sign for Doom Asylum.  I want to revisit this movie.  It's Friday night with your friends campy fun.  It's also 1h 17m and moves quickly so you have no worries about people getting bored.  Pick this up if you like 80's cult classics, schlocky horror, or just want to see a very nice pair of breasts thanks to Ruth Collins.  I'm not even trying to be a pervy jerk here because I am of the homosexual persuasion and I can admit that those, well, they're just swell.

If you want to pick up a copy of Arrow Films' Doom Asylum then you can click here to get it from Amazon.  It's currently at the $29 mark for this blu-ray but the joy it brings is free... and $29 in order to purchase the disc to bring free joy.  The free joy is included in the $29.  Just buy it!  Also, buying it from that link helps out 30 Days of Plight with domain fees and caffeine!

Thanks again to Arrow Films' for a review copy of this film!
Posted by J. Cimba at 12:30 PM