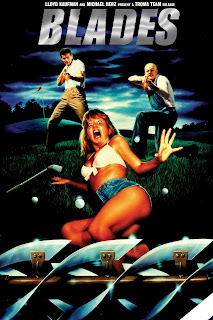 When I opened the case for this DVD the receipt from 2007 was still inside.  This is just letting you know how long this disc has been sitting on my shelf, unwatched.  Part of a Troma Triple Pack, with two other films that I honestly can't remember or be bothered to get off the couch to check, I chose today's film because it takes place on a golf course.  I expected the worst and was given something that transcends horrible and is ranked among the greatest tortures from Hell.

Blades takes place on some low-class course where Roy begins his new job as the course pro.  Kelly spends most of her time making awkward and confused faces all while hating that Roy took the job that was promised to her.  The course is being prepared for the upcoming televised pro-am tournament but chopped up corpses are found littered around the greens.  Investigation leads us to a sentient lawn mower with balloons tied to the back.  It belonged to the dead father of the greens keeper.  Roy ends up defeating it with the power of golf.  This movie defeated me by stealing all joy from my life.

I fell asleep with 10 minutes left and hated that when I woke up I had to go back and watch the ending of this.  Blades is like someone watched Caddyshack and thought "I can make a horror version of this," but they lacked the humor, charm, and talent.  The only thing I really found interesting was the actor that, in the right light, looked like Kurt Angle.  Not Kurt Angle now, but Kurt Angle if his life choices sent him in a terrible Coors Light life spiral instead of him winning an Olympic medal.  Let me tell you, it doesn't turn out well for alternative universe Kurt.

I give Blades  0 John Deere tractors out of 5: