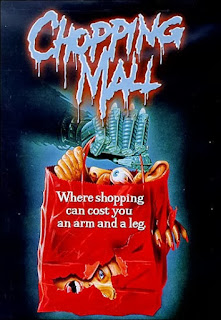 It's that time again where I face a film that, as a kid, I used to see the VHS box on the rental shelf at the local Phar-Mor and it would freak me out.  I think it was just the cartoonesq bulging eye at the top.  I also used to be freaked out by The Howling cover but to this day I'm not sure why.  At least Chopping Mall has a bag full of body parts being held by Dr. Claw.


Remember when shopping malls used to have a million floors?  Chopping Mall remembers.  In an attempt to bring in state-of-the-art security, this mall buys three robots that are a mix of Alpha from Power Rangers and Johnny 5 from Short Circuit.  In the informative video we are shown, the robots work by slowly following a perp until they're shot with a taser and probably killed.  If you show an ID badge though then the robot will leave you alone.  When a group of twenty somethings decide to stay after work and party/fuck on the display beds and couches of their department store, they end up running afoul of our security bots.  Slow chases and laser beams ensue.

These bots are trash as fuck but also built like tanks!  They all have these spindly grabber arms that go up like they're raising the roof right before they try to kill someone.  Fire, most explosions, and bullets that hit anywhere that isn't their visor will do nothing to them.  Then we have Suzy (Barbara Crampton) and her awkward death where a robot shoots her in the leg and it apparently renders her unable to craw or roll while the bot shoots over top of her.  I thought the thing could only shoot straight ahead until it aims at a gas can next to Suzy and lights her up.  Let me tell you, she can get up and run just fine after that.

You know what?  Fuck the cover of this movie!  There isn't a single rad metal robot fist or bag of body parts in the whole thing!  Well, maybe after that girl's head exploded some bits went in a bag, but these robots had lame pincer hands!  I want the batter robot from the NES game Base Wars to be the security guard!  Someone make a time machine and fix this movie to fit my desires!!

Chopping Mall is horribly dated and such a goofy premise, but in its own way it was fun.  I'm not saying it's worth going to see at some midnight showing or anything, but if you want to have a bad 80's movie night then this is the kind of thing you might consider.

I give Chopping Mall 2 Bride of Pinbot backglass images out of 5: