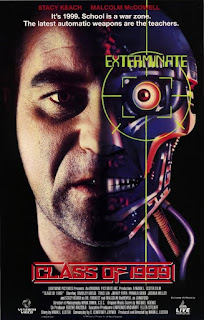 To the best of my knowledge, when I graduated high school in 1999 no one was in punk gangs and none of my teachers were murderous war robots.  My principal was also not Malcolm McDowell.  If he was then I would've been bugging him all the time to tell me about being in the Tank Girl movie.

Class of 1999, despite coming out in 1990, explains that in 1992 youth crime became such a big issue that by 1997 all major cities had schools that were basically just gang territories.  The gangs all dress punk as fuck, wear spandex pants, and may be too into Rufio from Hook.  Cody is released from prison just in time to return to his school where there are going to be three new robot teachers stepping in to help control the chaos.  Wanting nothing to do with his old gang life, Cody tries to keep his head down until he sees the gym robot murder a kid.  After that another robot murders his friend.  It's then that these robots begin to go AWOL and attempt to hunt down and kill Cody since he discovers their secret.

This film is a dystopian cluster fuck.  It's like 1983's Suburbia and Terminator 2 drunkenly jerked each other off in a bar bathroom and this was the product of their combined shame seed.  This film is the equivalent of what old men in the 80's mentally saw when they viewed slightly unsavory youths walk by their house.  Then that man would have some sort of wet dream about being a robot and spanking them in class while making eye contact with the other students... because that's a thing that happens in this movie.  There is also some sort of punishment the robots can do named "rap knuckles" which I really just wanted to be something hip-hop related, but then realized it meant to nun wack their hand.  I'm stealing Rap Knuckles though.  That's gonna be the new mixed tape fire I bring!

I give Class of 1999 1 preschool graduation image I grabbed off of Google out of 5: