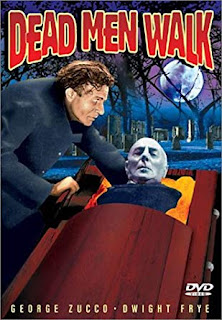 I chose today's film based solely on the fact that it is just over an hour and because I'm coming down with something and feel like death myself.  The disc itself is from a cheap 10-film pack which is supposed to be zombie themed movies but for a $5 set I doubt anyone was quality checking the content specificity with these choices.  That said, let's dig into today's film!

Dead Men Walk features George Zucco playing the roles of both Dr. Lloyd Clayton and Dr. Elwyn Clayton.  Llody is a man of science and a medical doctor while Elwyn studies the occult and, by the description on the box, is a wizard.  We open at Elwyn's funeral when it is interrupted by our Deus Ex Kate.  I don't know how she knows what she knows, but she knows way too much.  Elwyn's body is collected by his servant and Elwyn rises from the grave.  He then visits his brother and tells him he is going to wreck his life.  The rest of this film is pretty much Dracula except that Elwyn is targeting his niece and Lloyd has to be the doctor and Van Helsing.

I really liked Dead Men Walk.  I thought it was going to be a very 40's matinee film but it was fun to watch.  The pacing is really weird as they squeezed a lot into such a short time.  It's essentially death, but I'm alive, Gayle is to be married, now she's sick, a vampire?! etc. etc.

What I appreciated the most with this film was the dialog.  It felt like someone reading literature to you.  It began and end with semi-poetic verse and there wasn't much in the way of filler, just advancing the story.  I think that my biggest complaint with Dead Men Walk would be that there are no roads.  It's constantly people running through the woods, in the dark, to get to their location.  Elwyn I can write off as he is a vampire, but everyone else must have cat eyes or something.

I give Dead Men Walk 3 copies of Chuck Tingle's Vampire Night Bus Pounds My Butt out of 5: